MH370 THEORY: AN ONBOARD FIRE

Various scenarios have been put forth as potential explanations for the disappearance of MH370. As I have shown in my book, there is only one that is consistent with all of the known facts. To learn about the methodology that can be used to examine and assess any proposed scenario, read this article or listen to the audio version below.

Some people support the theory that an onboard fire disabled MH370. Various origins for a fire have been proposed, including lithium-ion batteries in the cargo compartment, a malfunctioning windscreen heater, and an oxygen leak in the cockpit.

As part of the MH370 investigation, it would be standard practice for the investigators to look at the potential for an onboard fire. In particular, investigators would examine all potential fire initiation sources, looking for any potential threats to the safety of the airplane. If any safety deficiency is identified, they have a responsibility to make that deficiency known, so that proper protections can be put in place.

For MH370, working through a standard investigation process can dismiss a fire scenario as the lead event. We can work through that process here – the same process that would be followed by a professional investigation team. We will look first at the potential for a lithium-ion battery fire to be the lead event; that is, the first event in a chain of events that led to the disappearance of MH370.

Our fire scenario starts with the initiation of a fire in a cargo compartment containing the batteries. Our objective, as we work our way through this scenario, is to try to connect this fire initiation to the first known anomaly in MH370, which was the disappearance of the airplane’s transponder signal. In other words, for this hypothesis to be validated, we must be able to construct a chain of events that link the cargo compartment fire directly to the transponder signal failure.

We know that when the pilot was making his final radio transmission, there were no fire warnings in the cockpit. We know that because the pilot’s voice was very calm, and he had not been alerted to any fire. We know that on the ATC recording of that call, there was no sound of an aural fire warning in the background. Therefore, it is reasonable to conclude that there was no lithium-ion battery fire in a cargo compartment when the pilot was making his last radio transmission.

The transponder signal from MH370 disappeared from radar screens less than two minutes after this final radio transmission. So here is another investigation question: is it possible that in less than two minutes, a fire could ignite in a cargo compartment, and propagate to where the heat from that fire could disable the transponder? Let me give you the quick answer – no. That is not a reasonable assumption, as explained below.

Within the official investigation team, all potential fire scenarios would be examined in great detail. Here is a condensed version of how professional investigators would conduct their analysis.

They would do testing to determine how long it would take for a propagating fire to spread all the way to where it could affect critical aircraft wiring, including wiring that supports the functioning of the transponder.

They would assess the type of wiring used to power the transponder. In particular, they would test the wire’s resistance to heat and fire. They would determine that the protective covering on such wiring is exceptionally resistant to heat and flames. In certification, aircraft wires are assessed as pass/fail by being exposed to the flame from a Bunsen burner. The testing is very stringent.

Investigators would know that before a fire could cause the loss of the transponder signal in MH370, the fire would have had to burn through the protective covering on the wire to expose the copper conductor inside. The exposure of the copper conductor would cause the wire to short circuit, and trip a circuit breaker. They would know that even after the fire had propagated all the way to where the wiring was located, it would take at least several minutes for the fire to burn through the wire’s protective covering.

Again, the above is only a summary of how investigators would assess the potential for a lithium-ion battery fire to have been the lead event in the disappearance of MH370. It is easy to see that such a scenario does not fit with the known facts. It would take much longer than two minutes for a fire to start in a cargo compartment and spread to where it could expose the conductor of a critical wire supporting the operation of the transponder.

We can look at another potential fire scenario that gained some support. In this scenario, the fire started from a defect in the windshield. The fire initiation was followed by pilot actions, and system defects, that led to the fire being greatly intensified by the introduction of oxygen.

Heat from the fire caused the circuit breakers for the transponders and communications radios to trip, and drove the pilots from the cockpit. The fire eventually caused a breach in the pressure vessel, and the airplane depressurized. Through all this, the autopilot remained functional. The pilots, who were injured, could not make the airplane descend to a survivable altitude, but they were able to aim the airplane south over the ocean. Then, they succumbed to hypoxia.

This is a textbook example of a scenario that can generously be viewed as “theoretically possible”. Some might view it as improbable, because it is based on a number of complicated actions and factors that had to come together simultaneously. But in the absence of proven alternatives, some people view it as credible.

In reality, there is not a single piece of hard evidence to prove that this scenario actually happened. It is the same for any of the other fire theories. Each of these theories depends on there being an unpiloted airplane at the end of the flight. The evidence proves that none of these fire theories are possible, because at the end of the flight the pilot was alive and functional, and he was controlling a fully functioning airplane all the way to the ocean surface.

The Theory of a Passenger Hijacking

The Theory of an Electronic Hijacking

The Theory of a Mechanical or Electrical Malfunction

The Theory of a Bomb, or Military Action 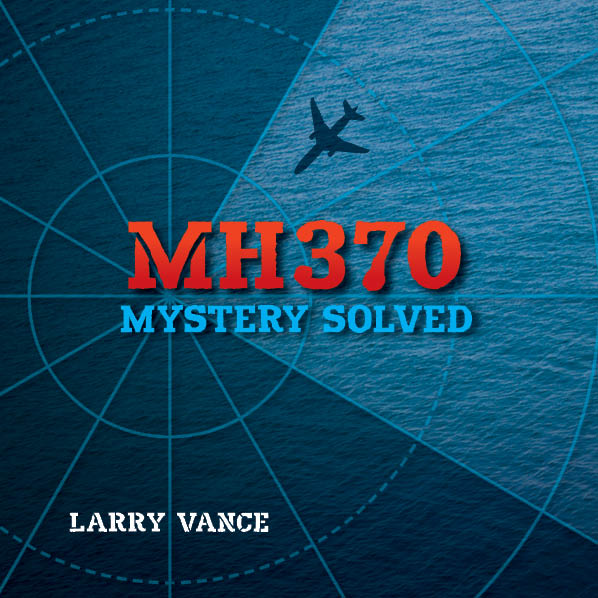 On March 8th, 2014, Malaysia Airlines Flight 370, with 239 people on board, disappeared into the dark of the night, never to be heard from again. The disappearance of MH370 has been described as the “greatest mystery in the history of aviation”.

Despite the efforts of an international investigation team, and millions of dollars spent searching the ocean bottom, the wreckage was not found.

This book explains why.